The 2022.2 Buchanan Prize has been awarded to Dr Adam Douglas, Dr Evy Panos and Dr James Lim. ACEM congratulates them on their outstanding achievement.

The Buchanan Prize is awarded to the highest scoring candidates in a cohort of the Fellowship Examination (Clinical), the ‘OSCE’, on their first attempt of the examination. 183 candidates sat the 2022.2 examination across two cohorts back at the AMC’s National Test Centre in Melbourne. Three trainees were awarded the Buchanan Prize: Dr Adam Douglas, Dr Evy Panos and Dr James Lim. We spoke to Adam and Evy about their win.

Adam was on the couch with his wife, Meagan, when he found out he had won. Meagan was heavily pregnant at the time. He said, “We were sitting there waiting for her to go into labour.” Their daughter was born only a couple of days later. “So, it was a pretty big week.”

Evy was in an Uber on the way to a friend’s wedding when she found out she’d won. She said, “I screamed, and my husband didn't know what was wrong. He asked, ‘Is everything ok?’ and I started crying and I ruined all my makeup, and I sweated through my dress, which is apparently my happy response. After that, it was a wonderful evening with many champagnes.” 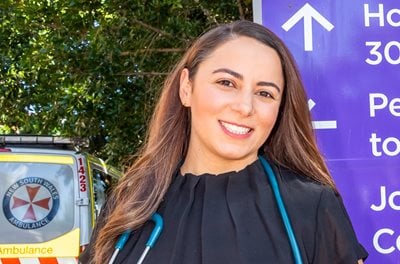 Evy was shocked she had won the prize, especially after failing the NSW trial OSCEs just a week before. Despite this setback, she was able to pull herself together and achieve amazing results on the day. “My advice for trainees in similar situations would be, try to figure out what simple things you can change to put yourself over the line. Reflect on why you failed the exam, don't let it get you down too much, and just give the best performance that you can on the day. And don’t treat it like an exam – just pretend that it’s the most interesting day that you’ll ever have in emergency medicine.”

For Adam, winning the prize was also a huge shock. He was awarded ACEM's Joseph Epstein Prize a couple of years earlier, so didn't expect to win both awards. He and his wife sat the OSCEs together, so they were happy to have both passed – winning the Buchanan Prize was the icing on top. For Adam, preparing for the exam with his wife was a huge advantage.

Adam said, “We tried to really get our lives in order and make sure that we had everything outside of work and study ready to go, so that we had a good 12-to-15-month leadup where we could just focus on the exam. My wife is really my biggest motivation.”

He and Meagan were the only ones studying for the OSCEs in Port Macquarie at the time, so the more senior doctors were able to spend a lot of time helping them practice for the exam. Adam said, “They were instrumental in providing opportunities to practice for the OSCEs and gave great feedback to really push us. It’s good to have role models that you look up to.”

Unlike Adam and Meagan, Evy had a nine-person study group at the Royal Prince Alfred hospital who sat the written exam and OSCEs together. She said, “Everyone was a huge support to each other. I think that really showed, because we had a 100% pass rate from RPA so could all celebrate together.”

Like Adam, Evy also received invaluable support from consultants. For her, having a group of consultants assist with their preparation was incredibly insightful, as they often each specialised in different types of questions.

Adam was drawn to emergency care from a young age, when he was involved in a lot of lifesaving competitions. As a junior doctor, he was drawn to the culture of collegiality and collaboration that emergency medicine provided.

For Evy, the draw of emergency medicine was all about people. She loves the teamwork hospitals require and being exposed to people from all walks of life. She also loves how useful emergency medicine is. She said, “If there was an emergency on a plane, I want to be somebody who could get up and help at the drop of a hat.”

In the future, she wants to direct this usefulness towards working rurally. She said, “There's such a shortage of not just emergency but GP and health structures in the country, so I’d love to give back. I also feel like it’s really worthwhile – you see so much really acute and interesting clinical cases that you don’t get as much of in the city.”

Adam has moved around a lot throughout the years but is now ready to return to the Sunshine Coast. He said, “We’ve got friends and family around that area. Now that we’ve had our little baby girl it would be nice to be close to them and create a life in South-East Queensland.”

The Buchanan Prize was established in 1986 and is named after ACEM Foundation Fellow Dr Peter Buchanan. It consists of a bronze medal and a certificate, and is awarded at the annual College Ceremony.