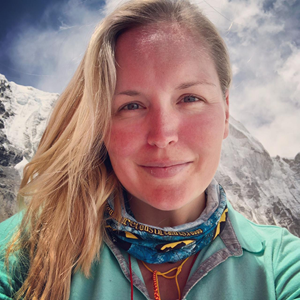 FACEM Sophie Wallace tweeted in early September that she had sent in EOIs for positions on ACEM’s Council of Education entities. Last week, she returned to Twitter. She was in. We spoke to Sophie about beating impostor syndrome

Sophie Wallace’s Twitter bio describes her as a ‘high altitude doc from 2009’. She has three seasons at Everest under her belt, including through the 2014 avalanche that killed 16 people.

With that you might think she feels pretty invincible, pretty capable of anything; but this week Sophie discovered she had been appointed to two COE entities and getting there felt anything but easy.

‘I love the unpredictability of emergency medicine and the fact there is always something to learn. It can be challenging and draining, but it’s never boring.’

Sophie is based at Royal Perth and says she is lucky to work in an environment with so many role models and with a consultant group that has an almost 50:50 male/female ratio.

‘I have a huge number of role models where I work and it’s a department that encourages us to develop our interests as an individual.’

For Sophie, one of her interests was in education and in participating more actively in College life.

‘I am one of many people who did not pass the first time around. I was not successful with my first MCQ paper and that experience helped me improve, but I empathise with anyone in the same boat.’

Since then, she has become involved in exam preparation at her hospital, OSCE sessions and small teaching groups and also attending the OSCE as a confederate.

‘It’s been valuable to see the amount of work that goes into making the exam what it is, as fair as possible and giving candidates the best chance of demonstrating their ability.’

Earlier this year the College put a call-out for nominations to several COE entities.

‘I saw a post by NoWEM encouraging everyone to apply, despite impostor syndrome.’

Impostor syndrome is the sense that you don’t belong and Sophie thinks there are probably a lot of FACEMs who experience it.

‘I think a lot will look at the Council of Education positions and think “I’m not qualified yet”,’ but she says everyone must start from somewhere.

‘It takes time, but you gradually gain experience and you learn from those who’ve put their hand up before.’

She says preparing her application has encouraged her and helped her to see how her skills as a FACEM could easily be used and applied in College roles.

‘The more I wrote and rewrote the application the more I realised what I have to contribute based on what we regularly do as FACEMs.’

‘We often take on multiple roles – as a mentor, in teaching, supervising, administration and organisation. If you stop and think about it, we all have something to offer.’

She says she would never have considered applying if it were not for the encouragement of peers.

‘Encouragement from others feels like validation that applying to COE is a normal and reasonable thing to aim for.’

Now she has been appointed to the Standard Setting Panel and Fellowship Examination SAQ Working Group, Sophie encourages others to also take the leap.

‘We need to stop telling ourselves we are not good enough and counting ourselves out of the process without letting the selection panel even see what we might be able to contribute.

‘Lean in and put your hat in the ring. We all have something to bring to the table.’

Opportunities to get involved with the College are listed on the ACEM website.