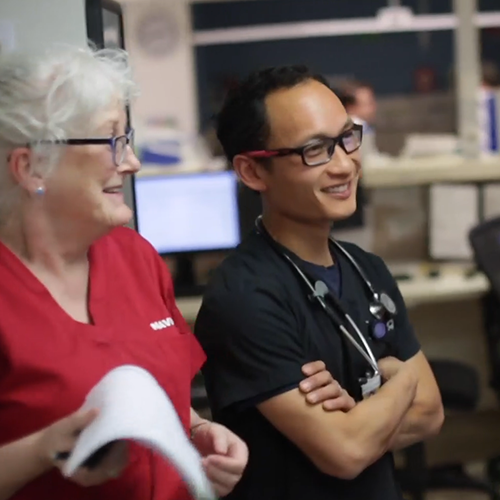 A Ray of Sunshine

FACEM Dr Ray Siauw was an inaugural individual winner of the ACEM Wellbeing Award in 2018. As nominations for the 2019 award draw to a close (5 August!) we spoke to him about what the award has meant for him, his department, and his program ‘LEX’

Dr Ray Siaw received an email from the College in the latter months of 2018. It told him he had been nominated for the 2018 ACEM Wellbeing Award, and asked if he would mind the College’s video guy popping out to do some filming with him about his Learning from Excellence program.

The video guy knew already that Ray had won. There was a lot of chuff within the College office that Royal Hobart Hospital was the little hospital that could – that a department so publicly maligned for much of 2018 was going to enjoy a moment of sunshine.

‘It was a pleasant surprise for me, and it certainly gave the ED quite a morale boost. Life in our ED has been pretty tough – this national award was a much needed bit of good news and we’re all quite proud of it’.

It has been framed and is now on display in the department.

In the video, which has now been viewed more than 800 times, Ray describes the ‘Learning from Excellence’ program.

‘The initiative we’ve started here at the Royal is called Learning from Excellence, or we call it “LEX” for short.’

LEX mimics a typical incident reporting system, but instead of reporting errors or adverse incidents, it enables staff to report a colleague for excellent performance – making a difficult diagnosis, being kind, going the extra mile – the good stuff. These incidents are then reported through the hospital in a monthly newsletter that goes out to all staff and makes them aware of what their colleagues are doing.

Ray took inspiration for LEX from a similar program being run in the UK.

‘I saw a similar initiative and thought it was a really positive opportunity that was quite straightforward to implement.’

Since his success was made public at last year’s ASM in Perth, Ray has received emails from across the country expressing interest in importing the program.

‘I feel like the award has also given LEX a bit of credibility with the management of the hospital, which has been quite supportive of the project.’

The award has driven Ray to look for other ways to enhance the wellbeing of his workplace.

‘I guess, hearing how appreciated the LEX initiative has been, I’ve decided it has been a very worthwhile experiment and has made me keen to seek out other novel, practical ways I can make our workplace a more positive place for my colleagues.’

The 2019 ACEM Wellbeing Award closes for nominations on Monday 5 August at 9am. Nominees for this year’s award will then be invited to submit content to support the judging process.
Find out more